I am disgusted with the comparing "detainees" at GITMO or Palestinian's in Israeli jails to prisoners of war. "Prisoner of War" is an official status recognized by most governments around the world. A primary qualification is that the prisoner must be uniformed or having a fixed distinctive sign recognizable at a distance. Others include that of being commanded by a person responsible for his subordinates, that they carried arms openly, and that their conduct prior to capture be in accordance with the laws and customs of war.

None of the detained at GITMO meet that criteria.

By both international law and treaty, spies, most snipers (gilly suits are not uniforms) , and covert operatives when captured are not given status as prisoners of war by these governments. This list includes the United States.

The Hamas operatives that kidnapped Cpl. Shalit from Israel were technically civilians. The Palestinian government, now realizing the reprisals from Israel are offereing a "prisoner exhange."

None of the Palestinian prisoners meet that criteria.

Here is the difference: Cpl. Shalit is a uniformed solder operating within the laws of land warfare. These laws are made to reduce the unnecessary suffering of combatants and noncombatants, protect the fundamental rights of those captured, regardless of them being military or civilian, prisoners of war, etc., and finally to help with the peace process. That last part makes the assumption that some day hostilities will end.

And now for the slippery slope... If Palestinians and their Syrian puppet masters wish to equate their kidnappings and executions with legitimate military actions, and if they wish to equate non-uniformed civilians and covert operatives with military personnel, then any Palestinian or Syrian, uniformed or not, is a "legitmate military target" and Israel is completely justified in destroying them.
Posted by Shawn McManus at 11:26 PM 2 comments:

A recent article describing Sen. McCain's changing positions on a number of issues - gun issues in particular - made me think of something that Sen John Kerry mentioned when running for president.

He was talking about support of a new assault weapons ban and that police chiefs that he had met were asking him for it.

Alberto Gonzales also stated his support for a renewed weapons ban. He shared that his brother was a S.W.A.T. officer in Texas and that he would like one.

I understand that our police officers are citizens and their opinions are valid. What bothers me is that their opinions carry more weight with some politicians than other citizens'. Our country is not a nation of the police, by the police, and for the police.

In general, it bothers me that many politicians think it acceptable and even required to discuss restricting our liberties with select groups. It is especially repugnant given the nature of the legislation.

We have seen the same now with taxing political speech of churches and blogs. Who was consulted before McCain - Feingold passed?

Any time new laws are passed and new regulations are made, we need to ask and have answered in whose interest they are made.
Posted by Shawn McManus at 9:35 AM No comments:

(I originally posted this at the Nation of Riflemen forum.)

Scenario: It is the middle of the night. You have awaken to the dogs barking. You hear your adolescent daughter scream. You dutifully grab your pistol. (Even if you do not have a pistol or daughter, let us say for the sake of the question that you do.) You head to your daughter's room and on the way there encounter an intruder. He realizes that you have a pistol and is very scared. He goes to his knees begging for his life, hands empty, asking you not to kill him. You daughter continues to scream from her room.

Question: What do you do with him?
Posted by Shawn McManus at 8:36 AM 2 comments:

Why is it that Zarqawi's death is labeled as "neither a Republican nor a Democratic victory" while anything bad that happens in Iraq is the fault of a Republican administration?

It is a typical spin used by politicians to take credit for anything good despite their involvement (or lack thereof) and to blame anything bad that happens on their opponents. The U.S. Democratic party does this all of the time but its effectiveness has long since worn.
Posted by Shawn McManus at 8:27 AM No comments:

Does the inability to beat an enemy on the battlefield justify killing the innocent around him?

This was taken from an unnamed news source from the web (which I am sure still violates some sort of copywrite):

"Video from the scene of the attack showed children scrambling over a flattened jumble of cinderblocks, concrete reinforcing bars, blankets, blue plastic bowls and other debris. A pickup truck was scorched and crushed.

Two young members of the crowd held up a child's sandal, a backpack with a teddy bear on it and a stuffed animal. The rubble was across a dirt road from a grove of palm trees."

Zarqawi did not wear a uniform. He could not beat the least American rifleman on a level field. He orchestrated the deaths of thousands and then hid, surrounding himself with the innocent.

The North Vietnamese worked this well. As a propaganda tool, when they were killed they had the media coverage of the deaths of the innocent around them. Al Qaeda gets to enjoy this now. And, make no mistake, they do enjoy it.

For those few times that Zarqawi managed to kill Americans, there were the deaths of the innocent around them. Al Qaeda enjoyed that too.

Fox News' Rick Leventhal has stated that there is no excuse for the murder of unarmed civilians.

I do not know if he would equate the killing of these children to murder. I do not equate killing and murder.

America could not beat Zarqawi on the battlefield because he was never there. He was a coward who killed men, women, and children and then hid behind children. If there were a bunch of children killed in the bombing, then it is tragic. However, it is justified.
Posted by Shawn McManus at 7:15 AM No comments:

Gay Marriage and My Departure

I have to break from the Republican Party for this one.

Currently, the Senate wants to implement a gay marriage ban. The reason for this is obvious: popular support for such a ban has been over-ridden by, in many cases, a single judge on the basis that it is un-Constitutional. In order to prevent judges taking such actions, only an amendment to the Constitution can stop them.

Here is where I get off the bandwagon. It is not the place of any government to dictate whom may be married to whom. The same government that bans gay marriage one year will over turn it 20 years later and then it will never be undone. This would be faulty of being a slippery slope argument were it not for the plethora of examples of past legislation/regulation. I do not believe that marriage is a governmental institution and not subject to the laws of man.

Marriage law should be limited to defining the types of marriage that a government will recognize. A gay marriage ban will likely include "civil union" clauses that give "partners" equal protections as a married couple. In that case, the legislation is worthless. It fails to do anything other than make a symbolic stab.

I would support an amendment stating that the U.S. federal government will only recognize marriage between one man and one woman. All social security survivor benefits, tax law regarding married couples, etc. would be based on that.

There are already treaties with other countries that allow polygamy stating that the U.S. will only recognize the first marriage. Those men and their multiple wives are still technically married.

This is slightly different but the logic still applies.
Posted by Shawn McManus at 8:05 AM No comments: 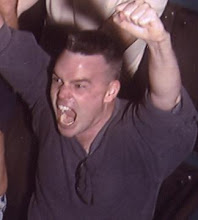